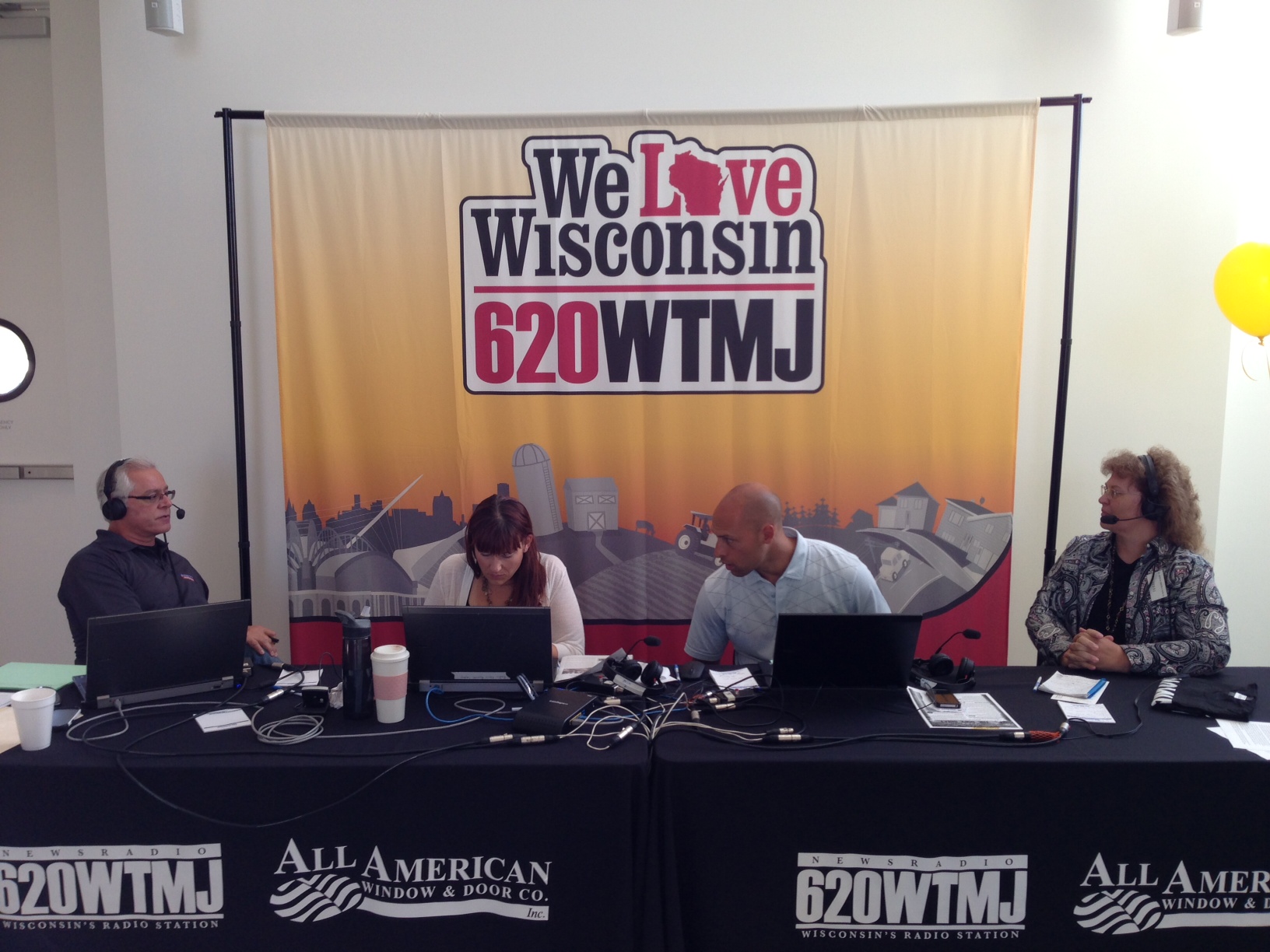 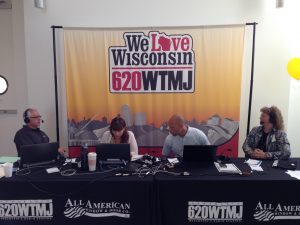 August 23 was an amazing Friday as we kicked off the We Love Wisconsin Tour with 620WTMJ Radio. We will be touring the state together during the next year and highlighting local communities. It is going to be a lot of fun and I’m so excited. The first stop on the tour was in West Bend at the Museum of Wisconsin Art. Gene Mueller and team did their broadcast live from the lobby of the building. We started at 5am so that meant getting up at 3:30am. The anticipation was high as everyone counted down the minutes to the opening of the show. Soon everything was going smoothly and we were having fun.

Many people came to see the show in person and have a cup of coffee. All American Window & Door was privileged to make a $1,000 donation to the Youth and Family Project Runaway Program. This group works with at risk children in the schools. Children that want to runaway have a safe-haven place to talk with counselors and share issues. Many children are self-referred because they know of the program. Many children find help and hope. It was my privilege to talk with the Directors and get to know them. My heart was touched as we presented the check because this group helped 250 kids last year. Children are very special to me and having a safe-haven resource is important.

620WTMJ shared some really cool things about West Bend. We learned about some famous sports people that still live in the area. We learned the brewery there is over 100 years old. We learned a lot about the history of Museum of Wisconsin Art. It was established in 1961 by relatives of Carl von Marr to exhibit his work. He was born in Milwaukee in 1858 and died in 1936. The Museum began collecting Wisconsin art. Currently the Museum has a deeper collection of Wisconsin art than any other place in the state.

The Museum moved into a brand new building in April 2013 and it still has the new smell. It is shaped like a triangle and is a gleaming white wedge on a hilltop.  The building itself is a work of art!! I was truly amazed as I didn’t even realize it was there. It doesn’t match the dark exterior colors of surrounding buildings. It appears fresh and modern with lots of windows (5,100 square feet) and unusual features.

We had the privilege of spending time with the Museum Director and our own tour with him. We saw a quilt (textile in the art world) that is 8’ x 9’ and made from 30,000 clothing labels. It is a beautiful work of colors and dimension by Terese Agnew titled Portrait of a Textile Worker. Therese is a Wisconsin artist. The textile is on loan from a Museum in New York.

We also enjoyed the storage gallery. It is a storage vault with glass walls so you can see everything on display. Portraits hang on large walls that can move to expose many more items. It is two sided so there are a lot of things to look at. It was truly amazing. The artwork in the Museum represents many hundreds of years and many different periods of time. It was quite overwhelming to me.

All American Window & Door has worked on many homes in West Bend. We are members of the Chamber of Commerce there and have exhibited in several small home shows there. The Farmer’s Market is wonderful and the parks and old buildings are beautiful. There is a rich heritage in West Bend. Next month we will be visiting Wauwatosa. Stay tuned for the details and check back for updates as we go on the journey.